We’ve got the scoop— that is, of where to go in Paris when you’re craving something cold and sweet!

This creamy bliss may be one of the best kept secrets in Paris. No, we’re not talking about custard or butter.

If you’re currently in Paris or planning a visit, you need to include a trip to the ice cream shop.

We’ve discovered the best ice cream in Paris. Something it all has in common— it’s homemade and not that factory-produced stuff you find in grocery stores.

Warning: this cold treat just might just blow you away with its unique, creamier-than-gelato texture.

There’s actually a very special reason it gets compared to gelato. Like gelato, French ice cream relies on more egg yolk and has a custard-like base.

So, it’s really hard to call this a competition. French ice cream just might rule supreme when it comes to creaminess and flavor, despite that gelato tends to get much of the credit.

However, you can be the judge of that. Paris is quite the cosmopolitan place, after all, and you’ll notice a couple non-French shops in our list of the best ice cream parlours in Paris.

Try them for yourself. You’ll appreciate taking a break after all the bicycling and site-seeing for this cold and creamy delight. 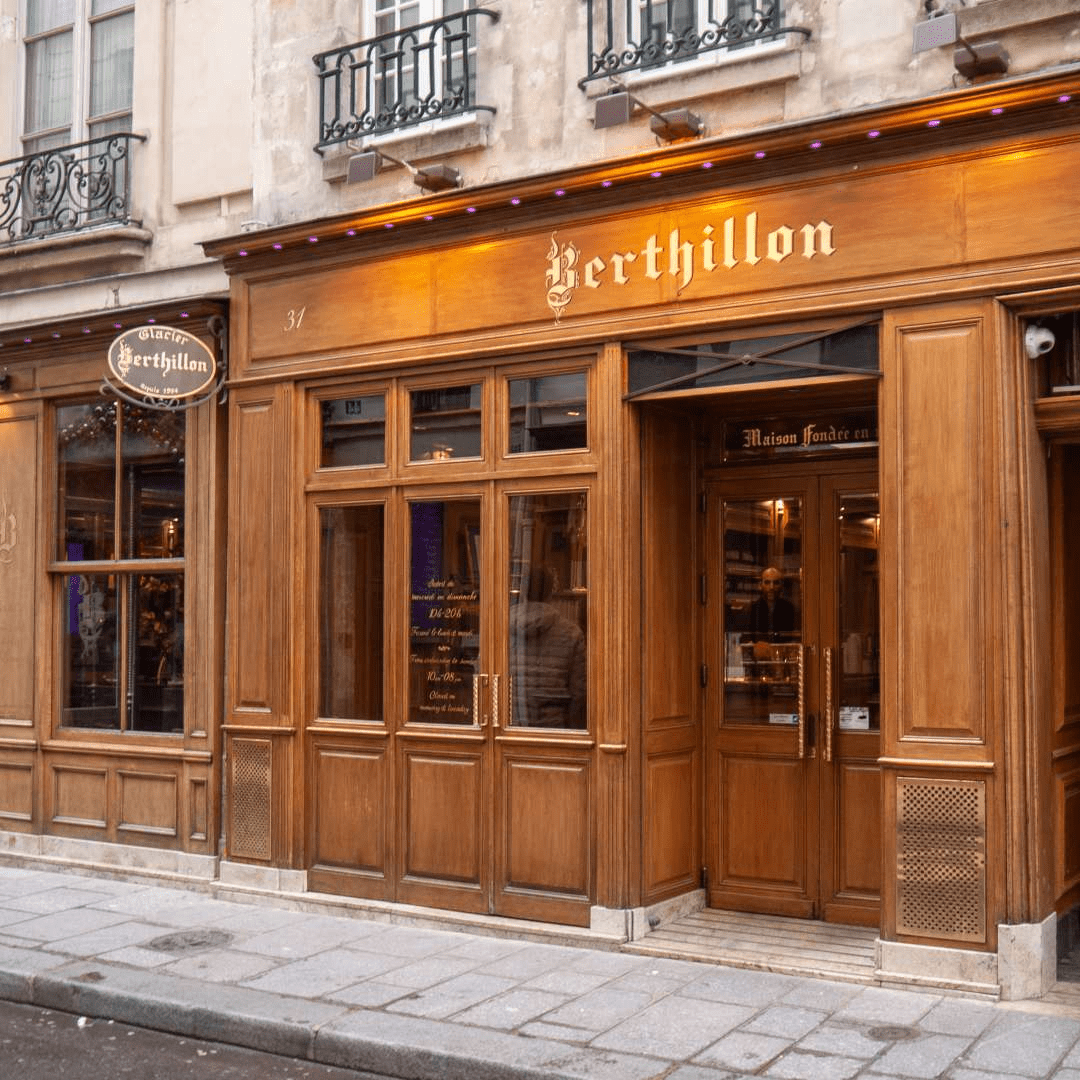 Our list just wouldn’t be honest if it didn’t include this famous ice cream parlor. Berthillon is so renowned that it even has a wikipedia page.

Berthillon’s roots lie in 1928 in a small bistro in the Parisian neighborhood of Île Saint Louis. In 1954, the owner and namesake decided to concentrate on the ice cream.

The hidden ice cream shop finally got its recognition by the Millau restaurant guide, and the rest has been history.

Many Parisians hail this as their favorite ice cream shop, and there often are lines stretching out into the street for it.

As a customer, you have the choice to take your sweet treat to go or to enjoy Berthillon’s lovely tea room, Salon de Thé.

The tea room is an elegant, yet casual setting to enjoy your choice from over a dozen flavors.

The shiney, marble floors contrast its warm, wooden walls with colorful paintings to create an ambient and cozy atmosphere.

Another highlight of the tea room— you can enjoy a lovely, Parisian breakfast before you chase it with ice cream and dessert.

While they make up to 15 varieties a day, there’s actually 70 different flavors between their ice creams and sorbets. So, you may not want to fill up too much on breakfast, especially if you want to try what they’ve made for the day.

When you’re near the end of your vacation and you’ve indulged, ice cream can make you feel a bit guilty. However, not all ice creams are created equally.

La Bac à Glaces is a shop where you won’t necessarily feel so guilty for treating yourself. It offers “natural” ice cream, meaning they add minimal sugars and no preservatives or artificial colors.

La Bac à Glaces has operated since the mid 1950s, and it has an old fashioned vibe and professional artisans making the ice creams, sorbets, and other dishes.

Founder Sam Yoel started the trade in his brewery, where he wanted to showcase Parisian food while innovating it to have fewer empty calories.

La Bac à Glaces impresses both the critics and customers for its consistently creamy and dense flavor while being lower in fat and sugar than the average Parisian ice cream.

What we said earlier about Parisian ice cream— it being exceptionally higher in fat— isn’t true about La Bac à Glaces.

Keeping to authenticity, the artisans at La Bac à Glaces  actually let the natural ingredients do more of the work.

This shop embraces tradition, health-consciousness, and experimentation. For those three reasons, we think this place is a small reflection of Paris itself.

Chestnut, rum raisin, pineapple, and coconut. If you’re up for a ‘buzz,’ try the alcohol-infused flavors— pear, raspberry, and cherry.

When it comes to cuisine, you’ll  find evidence all around Paris of  France’s special relationship with Lebanon. There are plenty of places for Lebanese street foods and fine dining establishments.

However, before now, you couldn’t always get Lebanese-style ice cream in Paris. That was the case until Lebanese-French siblings opened up Glace Bachir.

This is one of Paris’s first ever Lebanese ice cream shops, and it’s gained love of Parisians and travelers as one of their favorites in general.

It all started in two siblings’ backyard, and today

Instead of cream, the ice cream at Bachir is made with milk and tears of chios. Tears of chios, or sometimes called mastic, is a chewy resin off a pistachio tree.

The mastic gives the cream a pine flavor, which isn’t something you taste often. In some flavors, like their main one Achta, they add in orange blossoms, and several say this reminds them of mouhalabieh (a traditional Lebanese dessert).

Other wholesome flavors include the rose petals, almond, and milk flower. If you’re a chocolate or lemon fan, you won’t be disappointed either.

Une Glace à Paris is what happens when you mash together two dessert geniuses. Not only do they make delicious ice creams and sorbets, but they make something a bit more unique— frozen pastries.

Emmanuel Ryon and Oliver Menard have been scooping out this delicacy since 2015. Ryon happens to hold a Meilleur Ouvrier de France Glacier title, as well as world championships for his pastries.

Here, you’ll encounter creativity and quality. Ryon and Menard use more than the typical vanilla, chocolate, and even fruit ingredients to flavor their desserts.

You’ll find ice creams and sorbets made with unexpected herbs, spices, teas, and even smokiness. Of course, they have fruits, chocolates, vanilla, and nuts for those who stick to the classics.

If you’ve ever tried ice cream cake and liked it, then you can try their elevated, frozen pastries.

The Millefeuille de glaces, for example, has two thin cookies or wafers stuffed with different sorbets and ice creams, topped with more sorbets and fresh fruits.

For seating, Une Glace à Paris has a terrace for those who want to relax with their ice creams and newspapers under the sun or who want to come with their families.

Definitely don’t pass up the eskimo with pink geranium petals.

If you haven’t heard of it, eskimo, or akutuq,  ice cream originates from the idigenous tribes of Alaska, and it’s traditionally made from animal fat, sea mammal oils, and flower petals or essence. Une Glace à Paris puts its own spin on the delicacy.

Also, don’t miss the iced cookie with shortbread base and Tanzanian chocolate! They add almost the whole house in toppings.

I think we mentioned the multicultural nature of Paris. Since French and Italian ice creams share so much in common, we can’t blame Parisians for loving authentic Italian gelato so much.

Pozzetto, hence the name, is an Italian-owned cafe that’s famous for having the best gelato in all of Paris. It’s a big reputation to live up to, but critics and customer reviews show a consistent adoration for the place.

The high adoration doesn’t stop in the gelato, though. At Pozzetto, they’re famous for having some of the best espresso in Paris, along with delicious salty snacks and sandwiches.

Pozzetto is a truly artisanal place, since it, too, experiments with surprising flavors, including spicy peppers.

After you’ve tried all the Parisian ice cream varieties, this is a nice way to mix things up. This Italian-owned cafe has friendly service, where a “Ciao,” goes very far.

After a day out in the warm sun, you’ll enjoy fresh gelato and a cup of espresso.

If you like nutella, the Gianduia might just knock your socks off. Pozzetto makes it with their homemade chocolate hazelnut paste.

This Italian phrase means, “the flower of milk,” or the very highest quality of milks, and the gelato is made purely from that, with no egg, butter, or other ingredients or flavors other than dairy.

Due to Covid-19, you definitely want to call ahead and check on cafe and restaurant restrictions— even in the case of ice cream parlours.

Many countries in Europe are requiring a Covid Pass, or barcode verifying your vaccination, PCR, or antibody status in order for you to enter non-essential establishments.

Also, even if you have a Covid Pass, it’s likely going to be harder to find a place to sit. You might want to arrive early and check to see if there are outdoor seats available, as many of the places on these lists have lines stretched into the streets daily.

If not for Covid-19, the hours of operation in Paris tend to vary with the seasons. If you’re traveling in the Winter, many ice cream parlours can close earlier than they would during their peak, Summer hours.

Lastly, French ice cream tends to be creamier and more dense than the North American varieties. Because of that and France’s tendency to make smaller portions, you may want to order two scoops instead of one.

A scoop in Paris might be much smaller than the scoops you’re used to back home.