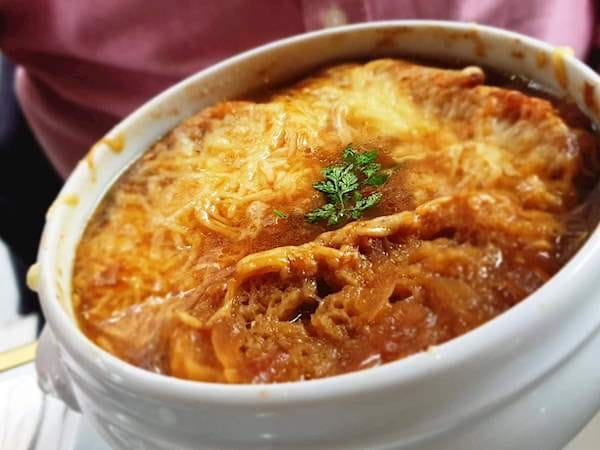 The People’s Dish That Rules Soup-reme

Many French folks prefer this as their first meal after a night out, or at the end of a big wedding. Personally, I’ll take it for a cozy lunch or dinner any day of the week.

You may smell it oozing out of a modest kitchen, just as likely as you’ll pay the big bucks for a tiny bowl of it at a Michelin-rated restaurant.

While there are kingly legends about this pungent and steamy sensation, food historians think it has humble origins.

If we trace back just a few hundred years ago, we find French onion soup in the historic, bustling Les Halles market.

There in Les Halles, servants sold the scraps from banquets to the poor.

Eventually, some historians think, this soup re-emerged from the onion scraps. (Although, it was definitely more watery back then.)

If you peel back even more layers, to the Antiquity period, Rome’s slaves and poor ate a very similar onion soup topped with bread.

In the Middle Ages, French onion soup found its way into French cookbooks.

Some still swear it came mystically to France, out of King Louis XV’s barren cupboards.

Either way, we know the people of modern-day France have loved soupe à l’oignon for quite some time.

Parisian chefs have now elevated this soup from its humble beginnings by adding a few quality ingredients and extra steps to highlight and complement the flavors.

They sweeten it by caramelizing the onions and adding wine to the stock. Then, it’s endowed with a beaucoup layer of grated cheese (usually gruyere) and slid under the broiler to crisp.

This staple won’t be going away anytime soon, and folks are still finding ways to make it better.

For me, a delicious French onion soup uses high-quality, homemade beef stock, organic onions, raw gruyère cheese (to get that extra creamy molten cheese layer on the top), and the white wine boiled in for some tartness.

Also, let’s not forget a healthy proportion of French bread on the top. Few things in this life are better than crispy bread with butter— the perfect thing to sop up that steaming beef broth.

Depending on the quality of these extras and the restaurant’s Michelin status, you’ll pay a premium compared to the old days of soupe à l’oignon, but to experience the best version of this dish is an experience not to be missed while you’re in Paris.

Now that we’ve got your mouth watering, we’ve cooked up a list of the best French onion soups in Paris.

Other than its French onion soup, we love La Jacobine for its homey atmosphere and value.

Here, you can sip on house-made wine and relax.

To go with your onion soup, you’ll have a choice from some other outstanding French classics.

We recommend the escargots and duck confit, but La Jacobine is an overall people-pleaser.

Also, this place offers terrific value and service for its prices, unlike the many tourist traps in Paris.

If you want to unwind and escape the widespread pretensions of the culinary scene, you should definitely get your onion soup from La Jacobine.

In fact, their menu calls the French onion soup “famous.”

If not for the onion soup, people come for the fish and lobster.

However, they also cook up some delicious beef and chicken specialties, such as the Châteaubriand beef filet and the farmer’s “red label” roast chicken.

This is an ideal place to bring the family or your co-workers, since the menu includes several sharing platters.

As far as the look and feel, it seems that they’ve put in just enough lighting, with the right amount of deep colors and comfortable furniture.

At Flottes, you can come in either your semi-formal wear, straight from sightseeing, or for a business gathering. It’s not so formal that you’ll feel out of place in your day clothes, or vice versa.

If you want stellar onion soup alongside a gourmet meal, definitely try out Flottes.

Translating to “The Chicken in the Pot,” this Michelin-rated restaurant didn’t rise to celebrity status overnight. This gem has stood for 80 years in the Les Halles neighborhood.

Owners Chef Jean-François Piège and his spouse made their menu with a goal in mind: to showcase the best of the best of French cuisine.

Sinya Usami, the executive chef, has modernized the menu items while keeping the original, rustic charm.

When you walk in, it’s hard not to feel like you’ve gone back in time. The vintage wallpapers, soft pink table covers, and delicate decorations reflect 1930s Paris, when the restaurant originated.

If you want to enjoy your French onion soup in an old fashioned setting, definitely consider here.

This next stop in Le Marais neighborhood is recommended by critics and featured on Taste Atlas.

The owner, Xavier Danamur, keeps transparent about his cuisine and the ingredient sources.  That’s why he makes sure to put the suppliers’ names down on the back of the menu, as well as on the website.

When you come, you should definitely try their house-made wine or their organic barrel beers. Either would make a lovely compliment to their popular French onion soup.

If you’re extra hungry, their salmon and creme brulee draw in folks from all over the capital and country.

It’s atmosphere— formed by its large-stoned walls and spiraling stairwell— is reminiscent of Old Paris.

We definitely recommend you see for yourself after all those hours of shopping in the Marais neighborhood. 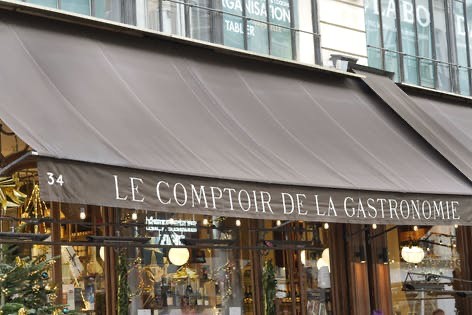 This is a terrace restaurant that makes their own cheese, cold-cuts, and other impressive specialities.

It’s located adjacent to their own gastronomie boutique, and we just need to say this— come here if you love meat and cheese.

While they do have vegan and vegetarian options, this is a beer-meat-and-cheese lover paradise above else.

Their homemade sandwiches go great with a craft beer and a bowl of…French onion soup, of course!

If you’ve just had one too many drinks the night before, this place is perfect to let French onion soup do, well, its job— cure your hangover.

Sandwiches stuffed with high quality meats and cheeses don’t hurt when you’re in that state, either.

Also, Montmartre is a Parisian neighborhood with its own quait, village-like feel. That means less traffic horns for those raging headaches.

As modern travelers, we know that restaurants pop up, improve, and decline over time. If you find a better French onion soup while you’re in Paris, please reach out and let us know so we can update our guide.