The Best Food Markets in Paris 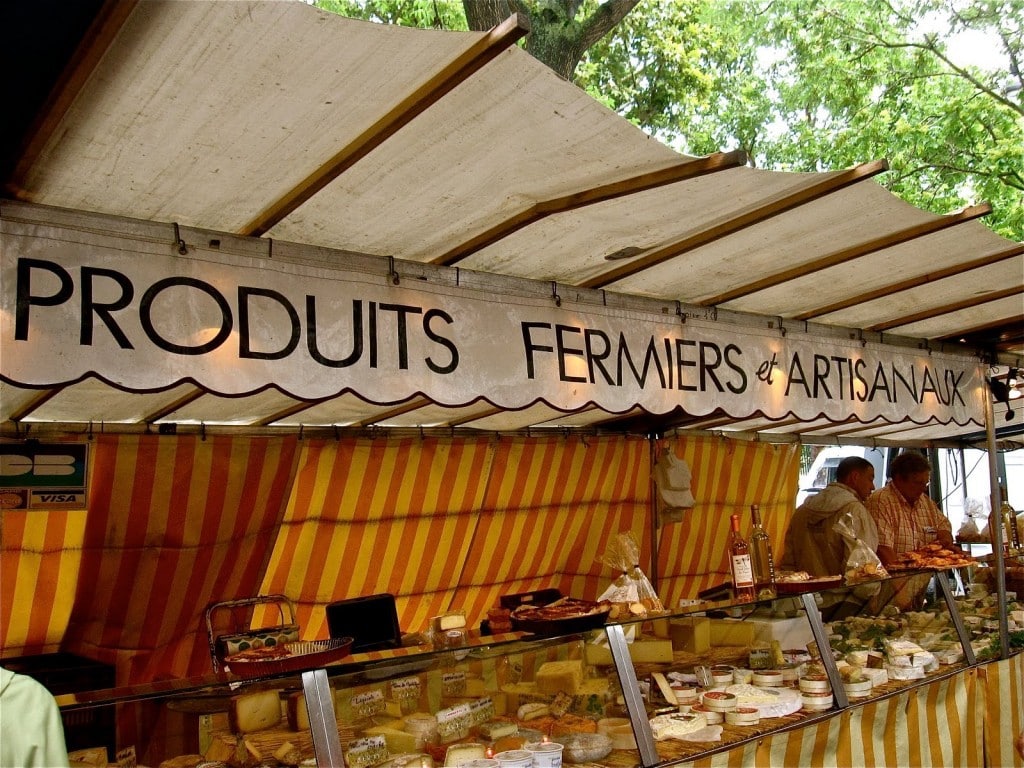 In the age of supermarkets and instant grocery delivery, one thing France has kept is its markets, or marchés. The market is a place where locals, suppliers, and cultures meet, and it goes back to medieval times.

In fact, it’s hard to think of French capital without a visual of its food or its open air markets. If not for the quality, social aspect, or support for small, local farmers, Parisians have largely stayed faithful to the street markets.

So, if you’re coming to Paris and want the full Parisian experience— go down a street market!

There, you’ll find locally-sourced produce and several sources of grass-fed meats. Many of the top chefs in Paris arrive at the crack of dawn to the markets and pick out fresh ingredients and meats themselves.

For that reason, you’ll want to arrive early if possible. The best of the produce gets snagged quickly!

One tip: “dégustation gratuit,” means free sample. Many vendors will allow you to sample the foods before they sell it you.

Another tip: Ask before you touch! Don’t assume you’re allowed to squeeze every tomato or other produce without asking the vendor.

Double-check the opening hours. Most of the outdoor markets are open daily, but some operate the whole morning and close in the early afternoon.

Also don’t forget— not all vendors accept visas or credit cards, so have some currency on hand.

Marché des Enfants Rouge is seated in the heart of Haut Marais. If you want to dive into the deeply multicultural spirit of Paris, this is the spot.

Here, you can find every sort of cuisine from Mediterranean, to North African, to East Asian. Naturally, you’ll find people from all walks of life and places in the world flocking here year after year.

This market takes its name from the seventeenth century orphanage known for its inhabitants running around in red coats. This is how the market adopted “rouges” and “enfants” in its name.

It closed briefly in the 1990s, but Parisians banded together to keep this open air market running. So, when it reopened, it expanded even more.

Whether you’re a foodie or just wanting to try real Paris food,  there are three spots you can’t miss at this market:

The first has yum-yum in its name: Chez Alain Miam Miam (‘Maim Maim’ is French for yum-yum). Chez Alain is the name of the quirky chef overseeing it.

At Chez Alain, you can find concoctions that are Parisian and Anti-Parisian all at once. By that, we just mean that Chef Alain makes goliath portions on a crepe pan.

Secondly, you’ll have to check out Chez Taeko. This is an authentic Japanese and Japanese/French fusion spot.

If you’re wanting a true mashup of cultures and time periods, Marché des Enfant Rouges is the right place.

Wedged between place de la Bastille and place de la Nation, Marché d’Aligré brings many locals and travelers alike with its rustic appeal. You can consider it the silk road of the 12th Arrondissement, or Bastille.

Here, you’ll find eclectic treasurers and get to stock up on high quality, local seasonal fruit and vegetables for affordable prices.

You’ll need to know first that the market is divided into two main parts: the covered area and the uncovered area.

Visitors and locals alike praise it for its high energy yet friendly, neighborly atmosphere.

Marché d’Aligré has a couple speciality shops that are must-stops:

Le Vieux is a charming, old world-style pub that is actually one of the oldest bars in Paris. It’s been running since the 18th century.

Another great stop— Paris Pêche. This is a classic Parisian fish shop with some of the most high quality, fresh fish in all of Paris.

If you’re in the Bastille neighborhood and need a stroll, this large, cosmopolitan market will keep you fed and engaged for hours. Plus, since there’s more than just fresh ingredients, you can be sure to have something customs-friendly to bring home on your flight.

This market has one of the most central locations of all the markets. It’s right in the 2nd arrondissement, and from it, you can get to Royal Gardens and even the Louvre Museum.

Rue Montorgueil is now a reminder of Les Halles, which was covered with concrete in the middle of the 20th century.

The history goes back to the 1100’s. The name “Montorgueil” derives from words meaning “Proud Mountain,” based on the mountain it ascends.

For this, Rue Montorgueil is one of the oldest markets in central Paris.

When coming to this historic market, there are two places you should definitely try out:

La Fermette is a charming, retro cheese shop that’s quite hard to miss. You’ll notice a figurine of a cow overlooking the establishment on the roof.

La Fermette offers tastings before you commit to buying, but one of their top choices is the soft camembert.

Then, you can’t stroll through a historic French market without getting a whiff of fresh bread and pastries.

Of all the patisseries in Rue Montorgueil, Patisserie Stohrer has stood the test of time. It’s operated since around 1730, and since then, one of its most popular treats is the baba au rhun.

In Rue Montorgueil market, you can shop around and [almost] feel like you’re ways back in time.

Wednesdays and Saturdays, 7am to 2pm.

Also called the ‘Pont de l’Alma,’ the President Wilson Market sits in the 16th Arrondissement but is almost considered in the 7th Arrondissement. It’s considered one of the best food markets in Paris, as several chefs from all over the city go here for their produce.

Besides the food and produce, President Wilson Market has a view of the Seine River, as well as the Eiffel Tower. This is perfect if you want to take a day to people watch and immerse all your senses in the city.

Every morning, the vendors have their produce and meats brought early, straight from the source.

Besides the high quality produce, here are some other goods you can’t miss in President Wilson Market:

You can rest assured that the fishmongers caught the fish on the coast that very morning, iced them, and delivered them straight to the market.

Rue Mouffetard is another iconic French market, and Ernest Hemingway even mentioned it in a novel. (He also lived just up the road!)

It’s in the 5th Arrondissement, or in the Pantheon neighborhood to be more precise.

The Rue Mouffetard is the oldest street in all of Paris— it dates back to Roman times. That’s not to say this market is the oldest market in Paris, but you’ll still get your dose of sculptures, frescoes, and other sites on your way to and from the market.

There are a couple places you can’t miss when you come and visit:

Mococha is a famous chocolate shop amongst those of general Paris. The chocolates sell for a hefty price, but they’re wrapped with care and in luxurious wrappings perfect for a gift.

Androulet goes back to the turn of the last century, and it has steadily grown in popularity among Parisian fromageries. It boasts offering 200+ cheeses!

The Rue Mouffetard market is a great stop if you visit the Latin Quarter. You’ll walk on literal history.