The Best Escargot in Paris

Slow and Steady Wins the Race

They say that slow and steady wins the race. Maybe that’s how escargots rose from food we scavenged off the forest floor to king’s cuisine.

Other than the Eiffel Tower, Notre Dame Cathedral, onion soup, or Paris itself, it doesn’t get any Frencher than snails.

We know now that we’ve chewed on snails since prehistoric times. For the Ancient Romans, only the elites got to indulge in them.

Over a thousand years later, in France, King Louis XVIII used escargot to impress a Russian Czar. From then on, France has considered escargot to be a premier, haute cuisine.

Today, France consumes over 500 million snails a year. That’s probably where the stereotype comes from, along with other “exotic” dishes like frogs’ legs, internal organs, duck foie gras, and the pungent French onion soup.

When cooked in the French and Southern European styles, snails taste similar to mushrooms but have a slightly more chewy texture.

Many folks have this misconception that the French eat them alive, chasing them across the dish with a salt shaker. This just isn’t the case in France’s mainstream culinary scene.

The French often bake them in mouthwatering butter and herbs or, if mimicking their  mediterranean neighbors, will serve them cooked in a tomato sauce.

However, according to authentic French cuisine, you’re supposed to stick to butter and herbs.

If you’ve eaten mussels or other seafood, this delicacy definitely won’t shock your senses— at least not in a bad way.

Paris has several places that serve escargot and escargot dishes. You’ll want to avoid the tourist traps and try the locally-approved spots.

We’ve put together a list of the best escargot in Paris, along with some helpful tips so you can come back saying you totally [s]nailed it.

Helpful Hints & How to Eat Escargot

Not all snails are created equal, though. Don’t pick up just any snail off the ground and try to eat it.

Escargot is the French word to refer to snails you can eat. Limaçon, on the other hand, is for inedible snails. That should tell you that you can’t (or shouldn’t) try to eat every type of snail.

Also, snails eat soil, which can contain toxic substances like rotting plants and decaying animals. Unless you purge and clean the snails properly, you’ll risk food poisoning or toxic shock.

Leave the job to a trained professional. France— especially Burgundy— has specialist snail farmers who breed, select, and deliver snails to Parisian restaurants.

Lastly, these aren’t exactly PETA-approved and definitely aren’t vegan-friendly. In France at least, they typically kill the snails by boiling them to death in water or by cooking them alive in a sauce.

And this often happens after they’ve been purged of their stomach contents.

However, it isn’t so different from the ways we tend to cook shellfish.

One thing to know about snails— They aren’t fast food. No, we aren’t just talking about their gliding speed.

Most edible varieties of snails are high in protein and low in fat and carbohydrates. That is, before French chefs douse them in butter and serve them with a baguette.

Also, it’s important to know beforehand that when you go to a place with authentic French food, escargot sits in the starters section.

Don’t expect to gorge down multiple pounds at a time. The traditional French bistro or café serves 6 to 12 on a special platter, often alongside a baguette.

Instead, expect your 6 or so escargot to accompany some French onion soup, foie gras ravioli, frog legs, and, of course, some great wine.

You definitely won’t be sluggish… at least not from your escargot appetizer.

Escargots Bourguignonne’s name references the region, Burgundy, from where this dish’s snail comes. They bake the snails in butter, garlic, and herbs (sometimes pistou) and serve them with some shallots, parsley, salt, pepper, and a baguette.

Cargolade originates from Catalonia, and it includes the snails grilled with garlic, parsley, paprika, and salt, served alongside aioli (garlic mayonnaise).

In classic escargot, they cook the snails in red wine or sometimes chicken stock, and top it off with a generous amount of parsley-and-thyme-infused butter and a crunchy baguette.

This last specialty— the Escargot puff pastry— works great for those a bit squeamish, as it’s a very neutral introduction to snails. It’s as it sounds— a buttery, garlicky, and herby pastry with a snail baked on or into it.

How to Eat Escargot

For the classic, non-pastry escargot dishes, they serve the snails inside the shells. So, extracting and eating takes some special tools.

Don’t worry, though. French restaurants will equip you with a set of tongs and a two-pronged fork to ensure you have an amazing meal.

Why we love it

According to travelers and locals alike,  Fernand is a staple in French dining, specifically for its escargot and wine.

If you love wine and want to try snails, we definitely recommend you stop by here. If you’re a wine lover and a first-timer when it comes to snails— those are even better reasons to come!

Despite its bustling success, this place has remained humble.

Chez Fernand Christine serves traditional French cuisine with a modern twist, and it reportedly has some of the friendliest and warmest service in all of Paris.

When you arrive at Chez Fernand Christine, you notice a quaint and rustic ambiance, curated by its stone and brick walls, red checkered tablecloths, and chalkboard menu.

When ordering your escargot appetizer, you can ask one of their attentive staff members for recommendations on a pairing. In fact, you’ll have over 350 wine selections.

Although its Escargot selection isn’t as long as other places on this list, what it serves is still some of the best escargot in Paris.

L’Escargot is a classic choice for escargot in Paris, and it boasts recipes dating back to 1832.

Compared to Chez Fernand Christine, this place is a bit more upscale, with white tablecloths and candles on the tables.

Because it dates back to the start of the second French empire, it’s also considered a historic monument of France.

Here, the focus is clearly the escargots, of which they have 12 different ordering varieties. See the menu here.

Guests have the options of the classic, traditional style escargot, escargot with brie, escargot truffles, escargots with peppers, escargots foie gras, or an assortment of all types.

For first-timers, we recommend you try the assortment to see what style delights you the most.

Due to its popularity and status, this restaurant doesn’t sell escargot for cheap. Expect to pay a full rate, and don’t expect to get a seat without a reservation.

Overall, if you want to try lots of escargot options and to visit a historical site all at once, L’Escargot is a must. 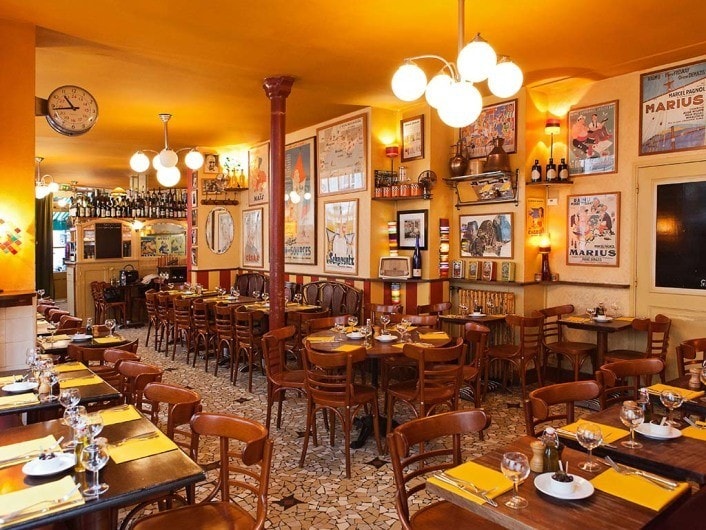 Located within the 3rd arrondissement, within the iconic shopping neighborhood Le Marais, Chez Janou is a mid-priced, highly accessible spot.

Its quirky atmosphere makes it an ideal choice for a casual night out or a family lunch break from all the shopping and site-seeing.

Its menu and atmosphere takes inspiration largely from the region of Provence in France.

In fact, it’s hard not to feel some sense of nostalgia and “back-in-time” feeling when you enter Chez Janou. Everything, down to the posters, colors, olive trees outside, the scents of thyme and sagebrush, and drinks evoke the spirit of Provençe, France.

If it’s regional comfort food you’re wanting, we recommend you order a full three or so courses— of course, starting with the escargot and finishing with the chocolate mousse.

This is one of those places you’d call a well-known hidden gem. We say it’s well-known, as it’s been in Paris for over a hundred years.

It’s got the spirit of a hidden gem because it’s entrance is so low-key— from the outside, this historic restaurant could almost pass for a boutique furniture shop or a bookstore.

This charming restaurant stands today, having only 4 owners in its history, and on two towering columns.

Its style is reminiscent of the time following the First World War, with post-Edwardian furniture, bright colors, and even brighter light pouring in from one of its tall windows.

Don’t let its deceivingly casual food presentation trick you– its humble selections are hailed as some of the best of their variety in Paris. Here’s their menu.

Their selection of escargot is brief; however, they specialize in what they do, and Parisians have been happy with it for quite some time.

While their wine list isn’t the most comprehensive in the world, they have fine cheeses that’ll have your mouth watering, like camembert, country white, and bishop’s bridge, to name a few.

Its highly aesthetic, but unpretentious atmosphere makes this a great spot to try escargot for the first time.

The escargot appetizer pairs nicely with their beef Bourguignon and the duck confit, along with a bottle of wine and baguette.

Because it can be a tourist trap, you might not want to arrive during the peak hours. Luckily, they stay open till midnight.