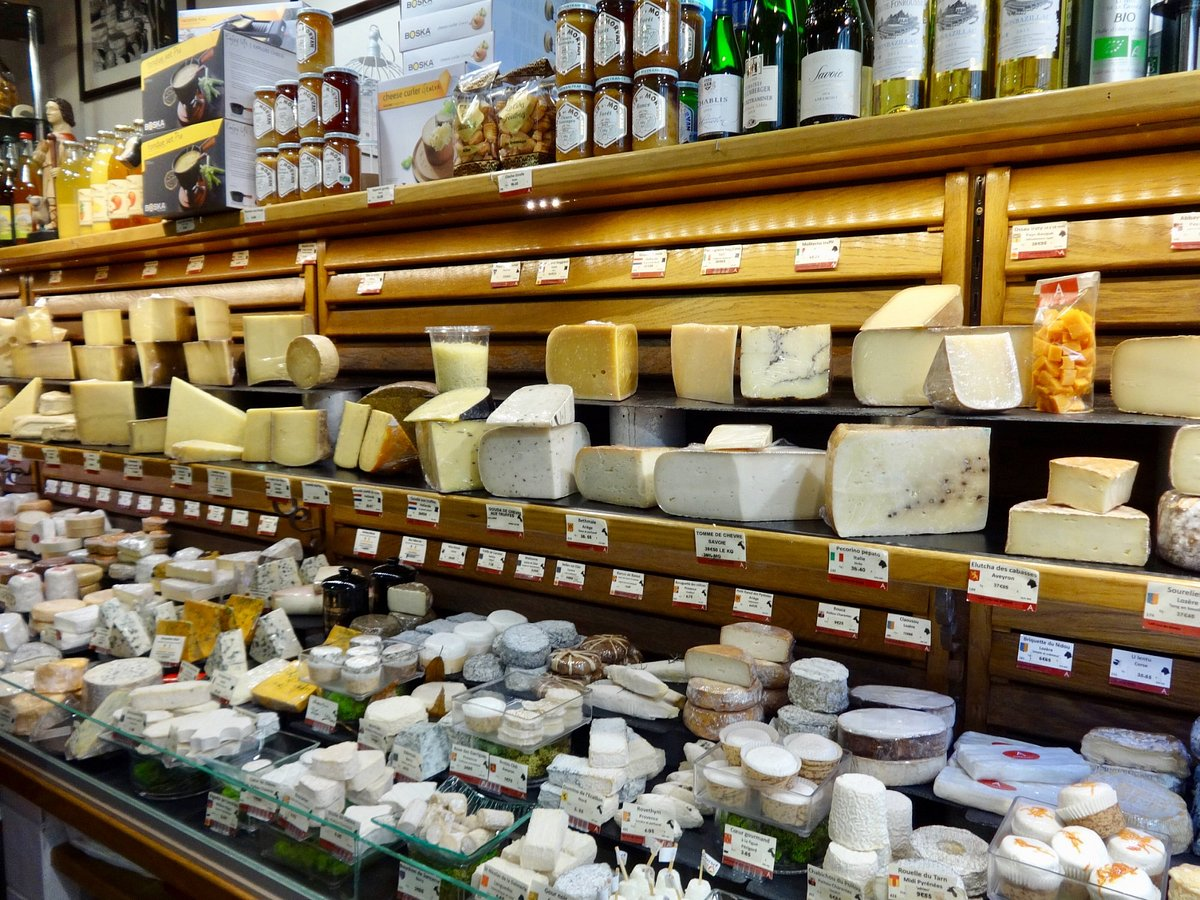 There’s no denying that France is the cheese capital of the world. France has the fourth highest consumption of cheese, and it’s the leader in fromage variety and quality.

You couldn’t talk about French culture without bringing up its famous cheese scene. Likewise, the Paris fromagerie, or Paris cheese shop, is an artform and culture of its own in Paris.

With all the cheese in Paris, it’s impossible to visit every single fromagerie— although tempting.

We’ve put together a list of the best cheese shops in Paris. Whether you want a classically Parisian or contemporary, cosmopolitan experience, Paris doesn’t disappoint.

The West’s supermarket culture grows steadily each year, but Paris has maintained its food culture of outdoor markets and specialty shops.

The fromagerie is no exception. For Parisian cheesemongers, cheese is a passion.

Before you visit one of the cheese shops in Paris— or even before you eat cheese in Paris— you should hang on to some tips.

While some of the shops are known for exceptional, personalized service, some cheese shops can be intimidating. Also, for non-French citizens, French cheeses themselves might intimidate you.

In their culinary culture, it’s tradition to pair French cheeses with wine, meats, and fruits. Plus, some of the cheese shops in Paris sell over 300 different varieties of cheese.

You’ll want to do some research beforehand with resources such as Expatica. This is a more in-depth guide to fromage.

We’ll go over some basics of French cheeses with you here:

In fromageries, you’ll find both raw and pasteurized cheeses.

However, in the best cheese shops in Paris, you find mostly raw cheeses.  Raw cheeses are made with raw, unpasteurized milk and resemble traditional cheese from before pasteurization was invented.

Many people prefer the taste of raw cheeses; however, it’s important to remember that because raw cheeses aren’t pasteurized, they will spoil faster than average, pasteurized cheese.

Besides the taste, another great thing about raw cheeses is that they don’t contain preservatives. Arguably, raw cheeses are a higher quality than pasteurized varieties, and they’re certainly on more demand— and pricier!

Another thing to consider: In the case of many cheeses, they get better with age.

Aging cheese can be a slow process, which is why some can get more expensive the older they are.

Some fromageries on this list have cheeses aged in herbs and done the traditional way.  We think the wait (and price) is worth it, but you can always ask to taste test and compare.

You can find guides online that’ll suggest cheese pairings. Pairing your cheese with the optimal wine, herb, bread, and/or other companion will enhance the taste and experience.

When you’re at the fromagerie, ask for recommendations from the sellers. Most are happy to let you taste the cheese with some pairings, and many even sell pairing items.

#5: Savor the cheese… and the experience.

If you want a perfect Parisian day, head to the markets for some raw fromage, fresh herbs, a warm baguette, and wine for a picnic on the River Seine.

Most of Paris’s good fromageries will be equipped with the picnic supplies you need. If not, there’s always a boulangerie (bread bakery), wine shop, or vegetable stand around the corner.

Almost like a mom n’ pop, this Chez Virginie opened in 1946 by a father and daughter. Since then, it’s been passed down in the family and has maintained a long, well-deserved reputation for some of the finest, raw cheeses in all of France.

Hint: Raw milk cheese is a type of cheese made from unpasteurized milk.

Walking in, you’ll see how the fragrant cheeses are playfully arranged along with the decoration. The shop not only sells but celebrates the art of cheese and its many varieties.

The owner, Virginie, is passionate about preserving the traditions and integrity of French cheese. She ventures out into the countryside of France, seeking the best quality cheese producers, curerers, farmers, and even grass.

The business has a long and close relationship with some of the producers, whom Virginie has known since she was a child.

Since some ingredients and processes to certain cheeses are seasonal, the supply at Chez Virginie is also seasonal.

The fromagerie has cellars and curerers itself; however, some of the products are specially selected from suppliers in the countryside years ahead of time.

Here’s a link to the raw cheeses Chez Virginie offers.

Sitting in the historical Saint Germain des Prés neighborhood, this is one of the fullest and most classically French fromageries in all of Paris.

Unlike Chez Virginie, this shop doesn’t leave much room for decor. Every wall and inch is filled with craft cheeses—virtually every French cheese imaginable A-Z.

This tiny shop is packed with flavor and quality, which is why it’s earned so many fans throughout France and the world.

The owner, Nicole Barthelemy, is an expert in cheeses, and the encyclopedia-like experience of her shop is certainly educational.

According to several reviewers, you’ll need to do your own research on cheeses and pairings, as well as have some money exchanged. There isn’t much of a recommendation service; although, you can taste the products.

Plus, this level of quality doesn’t come cheap. One thumb-sized piece of raw cheese can go for 15 or more euros.

Something Parisians and chefs appreciate about this place is the extensive variety of goat cheeses. Few fromageries can compete with Barthélémy’s supply of this hard-to-find delicacy. 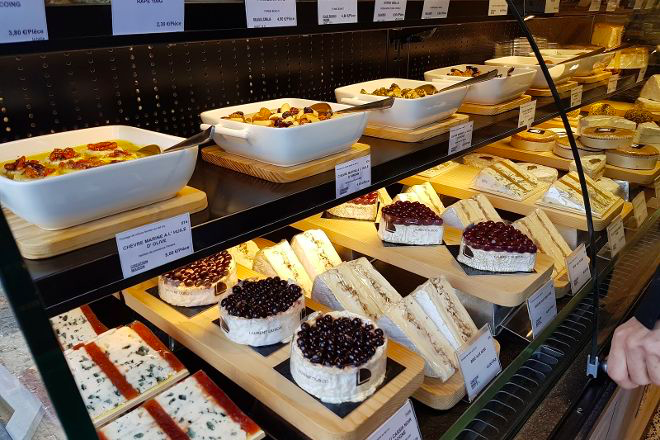 This fromagerie is a highly-renowned provider and has earned the title of Meilleur Ouvrier de France— the highest honor for cheesemongers in France.

This place is famous for its extra-aged Fourme d’Ambert, aged comté, and brebis. These are some examples in which the cheesemongers at Laurent Dubois have aged the cheeses well past the average time.

Another thing this shop is famous for— its extra friendly service. Reviewers constantly gush over the kind and helpful staff, who are patient with curious newcomers and informative for the cheese lovers.

The staff provides ready-to-sample portions at their ripe peaks, and they’ll even teach you about the origins and making. Whenever you purchase your cheese, they can cut it in easy-to-share portions for loved ones to sample.

Plus, for those wanting to travel back with cheese, the staff will wrap them in vacuum pack seals.

Overall, Laurent Dubois provides not only cheese, but a truly engaging experience. 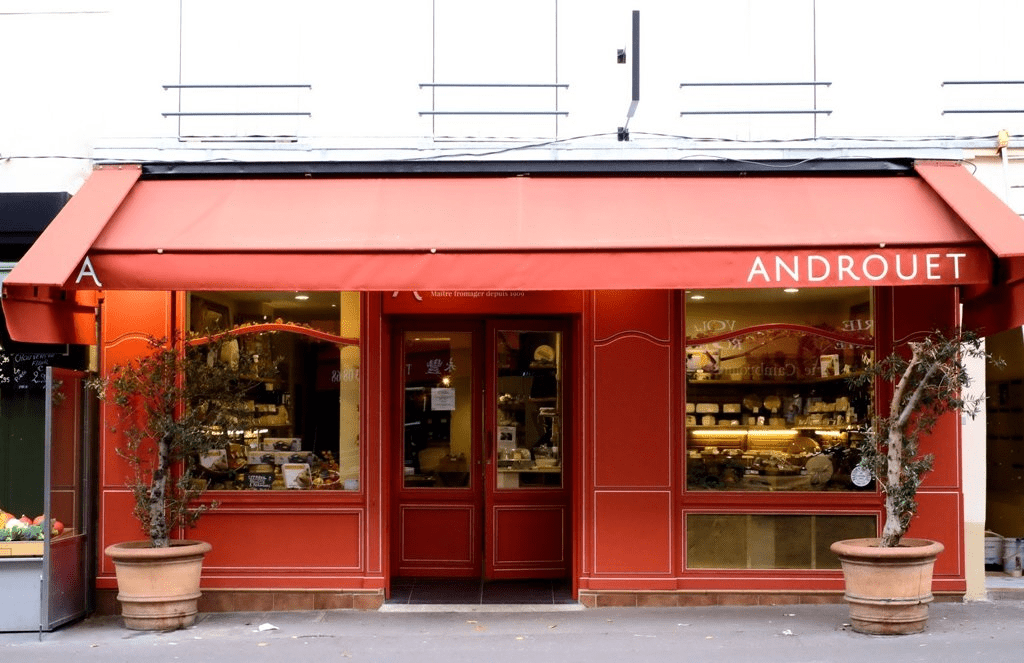 This is probably the most famous cheese shop in all of Paris. Since 1909, Androuet has sourced and matured cheeses and is rightfully considered a historic, must-see spot in Paris.

Because of this long-standing relationship with cheese-lovers, Androuet has 7 locations! That means that just about wherever you are in Paris, the odds of running into an Androuet are great.

You can also find an Androuet in other parts of France, as well as the UK and Scandinavia.

Besides its accessibility, another thing that makes this place so special is that it’s an affineur, meaning that this shop ages and matures its own cheeses.

It’s also a popular stop in many of the French food tours, as it’s become synonymous with the Parisian experience.

At Androuet, you can find cheese in all varieties, in every consistency and even animal source. One of their popular cheese types is sheep’s cheese, and they of course carry cheese sourced from goat and cow dairy.

The idea of the founder, Henri Androuet, was to bring cheese from all over France to the people of Paris. A few years later, in the 1920’s, he opened up a cheese tasting cellar.

Henri Androuet’s vision paved the way for the Parisian fromageries that would pop up in Paris later. Now, over a hundred years later, you’ll find cheese varieties from all over the world— in fact, over 300 types.

If you want an experience that’s both tasty and historical, don’t miss out on Androuet. It’s a total Parisian icon!

It’s only been around since 2015, just months after founders Laure and Mathieu met. They decided to build it on the historic rue du faubourg Saint-Denis, which is an extension of the historic Les Halles.

Laure has Japanese roots, and some of the cheeses, such as the Saint-Nectaire with Sansho and the Yuzu goat, reflect this.

Also, at this cheese shop, you should try their goat’s milk cheese. They have goat cheese varieties that you can’t find elsewhere in Paris, since their goat dairy suppliers work exclusively with Taka et Vermo.

Taka et Vermo is certainly one of the most dynamic and multicultural cheese shops in Paris, which is why we couldn’t make this list without it. It’s Franco-Japanese identity makes for a truly unique experience.

Fromagerie Goncourt is only the second-to-newest cheese shop on this list. Founder Clément Brossault left his career as financial controller for a high profile bank to follow a life-long dream of making cheese.

Now, as a cheesemonger, Brossault offers a personable and special experience for every customer who walks in his fromagerie.

Goncourt specializes in Corsican cheeses, like Calenzana. Calenzana is a soft cheese from the namesake region in France made from unpasteurized goat or sheep’s milk.

He also sells varieties from Switzerland. If you’re not sure of what you want, Brossault himself or one of his close staff members will help you discover something you love.

If it’s not already a charming cheese shop, Goncourt is known for its famous reindeer mascot, Elfi. Brossault swears it’s their good luck charm, which is why the reindeer stays in the shop all year round.

If you want a charming, personable experience for a fair rate, don’t skip up this memorable cheese shop.